Allied’s Emory focused on The Well, but has plenty on the go

Allied Properties Real Estate Investment Trust (AP-UN-T) president and chief executive officer Michael Emory says pre-leasing the office component of The Well is the company’s top priority, but a number of other projects are also keeping him busy. 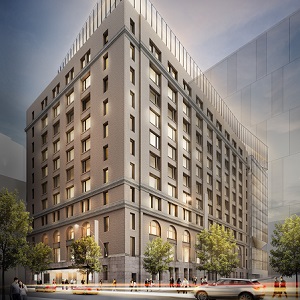 “There’s no end of opportunities,” said Emory. “For us, the biggest governor is not so much what we have to develop as how much demand is there and making sure that we don’t contribute in any way to the creation of oversupply.”

Allied is finalizing lease transactions with three tenants for an aggregate of 475,000 square feet in The Well. Shoring and excavation have been completed and workers have begun the extensive formwork and concrete pouring necessary to get back to grade. Completion is scheduled for 2021.

Allied purchased four small in-fill properties in Toronto and Calgary in the first quarter for $15.8 million. One of them was a small parking lot at 464 King St. W. in Toronto that gives Allied uninterrupted ownership on the north side of King West between Spadina and Brant Street.

Allied restored 460 King St. W. two-and-a-half years ago and its 468 King St. W. building is the head office of Indigo Books and Music (IDG-T). It also owns a parking lot to the north on Spadina as well as a brick-and-beam building occupied by Shopify (SHOP-T) at 80 and 82 Spadina.

“With that parking lot, we can create a structure that will rise above and out from the heritage structures, which will be preserved in their entirety,” said Emory. “In terms of facilitating an intensification opportunity and making it better and more interesting and a bit larger, it’s a really important addition.”

“One day it may enable us to assemble more property around 230 Richmond when we decide to intensify it,” said Emory. “It’s a great intensification opportunity for us, but we have so much going on that we see that further down the road.”

The two Calgary in-fill properties augment the GM Glenbow joint venture established with First Capital Realty Inc. (FCR-T) in early 2016. The assembly is generating a respectable holding yield of six per cent until the two partners decide to intensify it. The plan is to build above existing heritage structures on 11th Avenue in the future when conditions are more favourable.

Allied is also working hard on leasing the remaining office component of the 761,235-square-foot Telus Sky tower under construction in Calgary. The joint project with Westbank Corp. will also include retail and residential components and is expected to be completed in the first half of 2019.

“The only environment that’s somewhat challenging is Calgary, but even there I think there are signs of recovery,” said Emory.

“Nobody expects the recovery to be dramatic, sudden or rapid, but I think the worst is over and slowly and steadily the city will work its way out of the office vacancy that overhangs everything and it will continue to be the great city that it is.”

Allied has obtained rezoning to develop a 12-storey, mixed-use building at 540-544 King Street West and 1-7 Morrison Street in Toronto. The project will be a joint venture between Allied and Great Gulf, with Allied leading the commercial component and Great Gulf in charge of the residential elements.

It hasn’t been finalized whether the residential portion will be purpose-built rental or condominiums. The development is going through the approval process with the City of Toronto.

Allied and Westbank are pursuing a large development in the same neighbourhood which extends from 489 to 539 King St. W. Emory said it’s been a long and difficult process to get approval from the city, but he believes the project will receive a positive planning report.

Allied is expanding and retrofitting an older building at 425 Viger Ave. W. in Montreal’s downtown International Quarter, where Emory said office leasing is going “extraordinarily well.” Work should be completed in early 2020.

Allied is in discussions with potential tenants for its Toronto cloud infrastructure facility at 250 Front St. W., which is 61 per cent occupied and beginning to generate significant net operating income growth. Emory is hopeful negotiations to lease 35,000 square feet to three tenants might be finalized by the end of this month and for the entire building to be leased by the end of 2019.

Allied advanced $3.2 million to Westbank in connection with the development of 400 West Georgia in Vancouver. Westbank is finalizing lease transactions with three tenants for an aggregate of 312,000 square feet, which represents 88 per cent of the total gross leasable area.

Westbank has commenced construction, and Allied is obligated to acquire an undivided 50 per cent interest in the development when it’s completed in 2020.

“We’re extremely pleased with the rapid progress that Westbank has made in leasing that space,” said Emory. “It’s very encouraging and it reflects exactly what we believed was excess demand for office space in the Vancouver market on the part of tenants with fairly sizable requirements.”