Calgary’s boom and bust office market, which today is decidedly in the latter phase, is not recovering anytime soon, according to Alex Avery, managing director of Institutional Equities at CIBC World Markets. 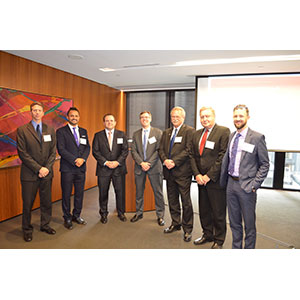 Any bounce back for the province’s oil capital is predicated on a strong crude price recovery, something Avery believes is unlikely given a revolution in the energy extraction industry that has reversed a long-term decline in U.S. oil production. New technology in the form of horizontal fracking has driven extraction costs to US$55 a barrel in the States, undercutting the costs of production for Alberta oil sands operations.

“When you think about the biggest driver of growth in Alberta the last 10 or 15 years, it has clearly been oil sands investment. It is a huge employer, a huge amount of capital that goes in. You can easily spend $15 billion on a new oil sands project, it can take eight or nine years and it employs thousands of people,” he told a meeting of the Commercial Real Estate Lenders Association (CRELA) in Toronto last week.

“There is an unlimited amount of shale oil (in the U.S.) available at somewhere around $50 or $60 a barrel, which is probably $25 to $35 a barrel cheaper than it is to develop through oil sands production. So view at this point is it is very unlikely that we will see a new oil sands development kicked off in Alberta in probably 10 or 15 years which is a big, big problem for the economy there.”

Crimped growth for Alberta’s oils sands is only one side of the equation. Calgary’s building boom has made the office glut far worse, he noted.

“Everyone had the same great idea, building a lot of office buildings. That didn’t just happen in Calgary and Edmonton but it happened all the way across Canada.”

Weakness in Calgary has made Toronto the least worst market in the post-2009 building boom. “Toronto’s office market has been the best by default, but it is not a particularly absolutely strong market it is just relatively much stronger than the rest of the country.”

Across the country, office vacancy is about 13.5% while a balanced market should be between 8 and 9% he said.

Office is at one end of the property types sector, with retail perhaps second-worst. “Retail is difficult to get a read on.”

The hasty retreat of Target from the Canadian retail scene at first glance should be seen as a warning sign for the prospects of the sector, but Avery viewed it as a special case. The company’s new CEO had a choice of trying to turn the failing expansion around (and getting fired if it didn’t work out) or making the easy choice of pulling out. “Everyone in the analyst community was cheering, so I don’t think Target really had anything to do with Canada.”

He noted that the owners of vacated Target space, the likes of RioCan and H&R REIT have easily released their properties.

“But I think the question that no one has been asking is what is the knock on effect of the Target vacancy on the rest of the retail market, not the Target space but all of the other shopping centre space?” The result is “a real dampening” of pricing for retail space as a result of Target’s exit.

Longer term, Avery is optimistic about retail. “Retail is the best combination of well-located land and the very smallest building that you can buy in commercial real estate. So I think ultimately the long term for retail is fabulous, the shorter term is going to be a little bit choppy as it often is in retail.

The best property type in his estimation? Industrial.

Avery also referenced his March report on the aging C-suites of most real estate investment trusts, which were started up by relatively young executives two decades ago. Up to 70% of them are expected to retire in the next five years or so, the CIBC analyst estimated.

“When we went to measure how big a risk this was in the REIT sector, it is pretty huge, it is quite enormous.”

At the top of the “old” list: RioCan, H&R, CAPREIT, CREIT, Allied REIT, Chartwell REIT, Artis REIT .. and so on.

More about aging CEO’s with a candid example in part two of this article that will be published in next weeks edition of Property Biz Canada on October 13, 2016.