“The downtown periphery is in many ways very different from the suburban market in terms of fundamentals, product, proximity to the core and amenities,” said Cushman & Wakefield vice-president of office leasing Matt Stesco to open a panel at The Real Estate Strategy & Leasing Conference. 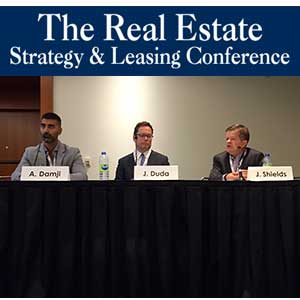 Damji said that companies in brick and beam buildings downtown are now looking a bit further out from the core as rents increase substantially when their leases come up, and they’re moving to areas such as Liberty Village, Queen and Dufferin streets, and Queen and Broadview Avenue. Even in these non-traditional office nodes, rents have risen over the past five years to prices approaching $40 a square foot gross.

Hullmark has older properties with character at 100 Broadview and 60 Atlantic Ave. that it has retrofitted with new building systems to cater to tenants who are moving from downtown and expect such things, along with increased service. Hullmark recently took over its own property management from third parties to ensure consistency of this service.

Hullmark owns, develops and manages office, retail, mixed-use and residential properties, primarily in urban Toronto. One of its newest assets, located at 80 Atlantic Ave., will be the first new heavy timber office building constructed in Toronto in several decades.

“A lot of people are looking for that brick and beam feel, and we can’t replicate what was done over 100 years ago,” said Damji.

“But what we can try and do is replicate features that tenants are looking for, such as exposed ceilings and operable windows. That’s really the justification behind our building at 80 Atlantic Avenue.”

Shields observed that while there’s been some migration between suburban sub-markets, there hasn’t been a great rise in it. Areas with easy access to public transit are proving more popular, and he said “the overriding trend with tenants is still consolidation of multiple locations.”

Increasing costs and congestion have led to some migration from downtown to the suburbs, and office real estate decisions are sometimes based on where the principals of a company live, according to Shields.

Stesco said Toronto’s downtown periphery has an historically low three per cent vacancy rate versus 10 per cent in the suburbs and 14 per cent in the diverse GTA West market, where new supply continues to be delivered. While the suburbs haven’t bounced back from the 2008 recession as well as downtown Toronto, Shields said American companies are considering Toronto’s suburbs because of potential cost savings associated with both lower rents and the lower value of the Canadian dollar.

Duda pointed out the shift to quality that’s taken place, as the Mississauga Executive Centre is faring better than nearby competitors of a similar vintage because it has invested heavily in renovations that have paid off with high occupancy rates and rents.

“We’ve benefitted from that, particularly on our Airport Road properties and to a certain extent on Highway 427,” said Shields, who pointed out that there’s not as much competition for existing product along the 427 corridor, on the east side of Toronto Pearson International Airport and at the Mississauga City Centre due to a lack of new developments.

A Colliers office tenant survey revealed that the most important factors that tenants consider when deciding to move are: business growth and expansion; cost control and efficiency; health and well-being of staff; and team development and collaboration. Less important factors were: corporate brand image; attracting and retaining staff; environmental sustainability; and organizational transparency.

Growing tenant sophistication has led to demands for improved customer service and property management, and the GTA’s construction boom has put more product on the market without enough experienced managers to properly oversee it. Property sales also cause management disruptions. Dream sees itself as having an advantage over smaller landlords in this area.

“As suburban ownership has become more fractured and less institutional, I think there’s a big opportunity for better operators to differentiate themselves,” said Shields, who believes that service doesn’t influence tenants’ decision to relocate but plays a role in whether or not they stay in an existing building.

Perhaps Dream’s biggest suburban office success story is the Airway Centre at 5935 Airport Rd. It was built in the 1980s and a few years ago had a 90 per cent vacancy rate. That’s now down to about 10 per cent after adding meeting facilities, a tenant gym and a shuttle service to the airport.

Such amenities are becoming increasingly important to tenants, but the panelists all agreed that it’s important that owners get to know and understand tenants’ needs well so they can focus on offering the perks that work best for them.