Calgary-based MasterBUILT Hotels is setting a blistering pace as it expands the Microtel Inn and Suites brand across Canada. 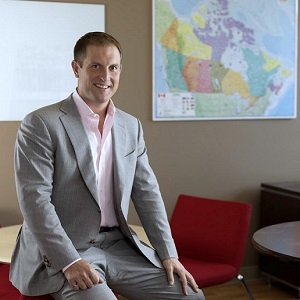 Eric Watson is the president of Calgary-based MasterBUILT Hotels, which is expanding the Microtel brand across Canada at a rapid pace. (Image courtesy MASTERBuilt)

“In the next month, we’ll have 17 Microtels open across the country and another two opening within the next eight or nine months . . . and we’re expecting another eight to 10 to start this year. We’re seeing a lot of momentum,” says MasterBUILT president Eric Watson.

“I don’t think there’s another brand, from a new construction perspective, that’s growing anywhere close to as fast as us.”

That’s from a start in 2011 when MasterBUILT Hotels was co-founded by Superior Lodging Corp. of Calgary and Jayman MasterBUILT. They signed a master territorial developer agreement with hotel giant Wyndham (WYN-N) to develop the Microtel Brand across Canada.

Based on the current build pipeline, Watson predicts by 2021 the company could have opened about 40 Microtels.

MasterBUILT hotels received its first Canada’s Best Managed Companies designation in 2014 and has stayed on the list since then, receiving the award again this April. The vertically integrated private company develops, builds and often manages the hotels. Watson says MasterBUILT Hotels directly manages about 60 per cent of the rooms.

The company employs 210 staff; about 30 work in the head office and the rest are deployed at the hotels. That number will grow dramatically in the next couple of years, says Watson.

The firm currently has annual revenues in the $20- to $30-million range but should be “north of $100 million” in about three years, he predicts.

MasterBUILT itself puts up from 10 to 25 per cent of the capital for each hotel and typically partners with local, high-net-worth investors to fund projects.

The efficiency of the economical Microtel brand is one of the keys to success and fast growth, says Watson. “It’s a mid-scale position brand that can actually compete with the upper mid-scale at a much lower cost.

It’s a very focused design. It gives the guest exactly what they need and what they’re looking for, but really not more than that. . . . The whole concept began with small rooms. They’re around 300 square feet,” says Watson, who adds that guests never say the rooms aren’t big enough. “It’s really almost perfectly sized.”

Microtels contain between 80 and 140 rooms. The economical brand runs with 18 to 25 staff per hotel.

The firm started building Microtels in smaller centres, such as Kitimat, B.C., Whitecourt, Alta. and Sudbury, Ont. Now it is expanding to the major markets including Toronto, Montreal and Ottawa.

Toronto, with its high land prices, demonstrates the virtue of an efficient design. Watson says the firm has a 108-room, 50,000-square-foot Microtel under construction on two acres just north of the city. A competing hotel chain has a 108-room project underway with a 70,000-square-foot footprint on 2 1/2 acres.

“Where you’re looking at land costs being $2 to $4 million an acre, potentially, we get far more efficiency out of the building.”

The deep level of partnership MasterBUILD offers its investor partners is another key to growth, he says. Putting in 10 to as much 25 per cent of the investment itself gives MasterBUILD real skin in the game, which builds trust with partners.

“Our partners and investors usually have a piece of the expertise but not all of it. They might be a construction company. They might be an owner, but they don’t know how to develop it or they don’t want to operate it. We’re one of the only truly vertically integrated hotel companies in the country.”

Investment up to $120K per door

Investing in hotels is a not inconsiderable investment, Watson says. All in including land costs, total project value is around $115,000 to $120,000 per door.

It’s a hybrid asset class that’s part real estate and part operating business. It can take years for the investment to pay off, but then it does offer good cash flow so investors in these hotels think longer-term.

MasterBUILT has had particular success with First Nations investors. The company has deals with six First Nation investment companies, from Vancouver Island to Val d’Or, Que.

“They’ve been a big driver of the business. They’re longer-term thinking. Usually they’re doing it for the community. There’s a sense of pride,” says Watson.

One of the First Nation-driven hotels is in Fort McMurray, which at 139 rooms is the largest hotel in the chain. MasterBUILT is partnering with the Mikisew Cree First Nation. The Fort McMurray Microtel also turned out to be the most challenging to build. The structure burned twice, first two years ago in an arson fire and then again in the Fort McMurray wildfire. Now it’s up and running and doing extremely well, says Watson.

MasterBUILT also takes a community focus in its charitable giving. The Microtel hotels have a charitable contribution plan called Common Ground, which includes a fund created from the donation of $2 from every room night.

MasterBUILT brings in community involvement via online voting so local residents can choose beneficiary organizations. Watson says in Kitimat, a city of 10,000, 4,000 online votes were cast.

Last year, the company donated $160,000 as well as hundreds of hours of staff-volunteer time. Watson says within the next five years, the company will be donating $1 million a year.