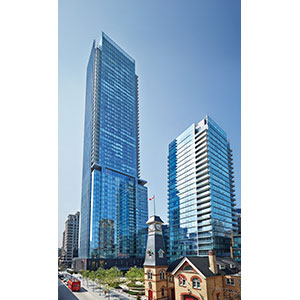 “The buyer acted very responsibly through the transaction and was very motivated,” said JLL Canada Hotels and Hospitality Group senior vice-president Mark Sparrow, who led the JLL team that oversaw the transaction along with fellow senior VP Luke Scheer.

“He had an affinity for the city of Toronto and really likes the Four Seasons brand, so this transaction made sense for him.”

Khan, the founder of Flex-N-Gate Group and owner of the Jacksonville Jaguars of the National Football League and the London, England-based Fulham Football Club, made the purchase through various family holdings. The family has taken immediate ownership of the property, which will continue to be managed by Toronto-headquartered Four Seasons Hotels and Resorts.

Four Seasons Hotel Toronto, designed by Peter Clewes of architectsAlliance, marked its fourth anniversary this week. It includes the Café Boulud restaurant and a 30,000-square-foot spa.

The complex at 60 Yorkville Ave. at Bay Street consists of a 55-storey hotel-condominium tower and a 30-storey condo-only tower. The condos are unaffected by the hotel sale.

Four Seasons Hotel Toronto was wholly owned by KHC until this sale to Khan. KHC is based in Riyadh, Saudi Arabia and publicly listed on the Saudi stock exchange. It was founded and is chaired by Prince Alwaleed Bin Talal Bin Abdulaziz Alsaud, a member of the Saudi royal family.

Sparrow said the Four Seasons Hotel Toronto has risen in value and KHC, a diversified organization with investments across a dozen sectors, believed it was a good time to sell. It made a profit of $17 million from the deal, the company said in a statement.

“They’ve done this multiple times in the past, where they acquire assets and foster great relationships locally to be able to bring it to stabilization and then reallocate that capital elsewhere within their portfolio,” said Sparrow, who added that there was strong local and international interest in the hotel.

“We don’t see this as a divestment in Four Seasons in any way, shape or form other than this property itself,” said Sparrow when asked if Prince Alwaleed was considering selling his stake in the company.

The sale of Four Seasons Hotel Toronto is the latest reason why Sparrow is bullish on hotels in the city. He cites strong fundamentals, high demand and limited supply, and capitalization rate compression as the driving factors behind a hot market that’s attracting international attention.

“It crosses over all segments, including select service and focused service in the suburban markets, to full service assets downtown, and certainly on the luxury side. There haven’t been any luxury hotel comparables that have traded in Toronto, and this really sets the benchmark moving forward.”