When Manulife Real Estate unveiled a 16-storey, 250,000-square-foot office tower 980 Howe at the corner of Howe and Nelson Streets in downtown Vancouver last November, they were facing a downtown office leasing market with a 10% vacancy rate, the highest it had been in a decade. 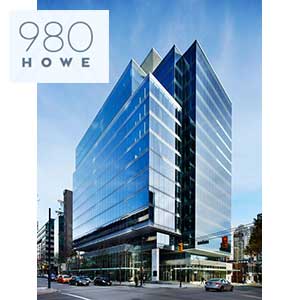 Manulife’s new building was an addition to about 1.5 million square feet of office space completed in Vancouver’s downtown core over the previous year and a half, with much more on the way.

The downtown office vacancy rate could have spike into the 12-15% range by mid-to-late 2016, leaving many shiny new offices vacant, commercial real estate experts in Vancouver predicted

But that didn’t happen.

In downtown Vancouver, the vacancy rate dropped from more than 10% in December to 7.8% by the mid-point of this year, according to Avison Young’s mid-year Metro Vancouver Office Market Report, Mid-Year 2016.

“Anything between 8 and 10% is considered a fairly balanced market,” said Glenn Gardner, a principal with Avison Young Vancouver.

“People thought the vacancy was going to go through the roof,” he said in an interview this week. “The reality is that a lot of the existing tenants that were occupying these buildings needed expansion space and it just never was available for them.”

Downtown Vancouver hadn’t seen many new office projects until two years ago, Gardner said. “Because there was such a lack of product delivered over a long period of time before these new office towers came, there was definitely a desire from certain tenants to move into the new quality buildings,” he said.

Lease rates downtown have remained strong, with AAA-class buildings earning $48-$71 per square foot, including rent, taxes and operating costs, according to Avison Young’s report. Meanwhile, single-A space is going for $40-$62 psf; B-class for $35-$54; and C-class for $26-$41.

Bart Corbett, Cushman and Wakefield’s senior vice-president of office leasing in Vancouver, said their research also shows an office vacancy rate currently in the 7-8.5% range. “Looking at the (downtown) market in 2014, I would have predicted the market to be in the neighbourhood of 12-14% vacancy here in late 2016,” he said. “The market just isn’t that.”

The current vacancy rate suggests there was a “pent-up demand” in the market, he said. “We didn’t have new product delivered to market in any real extent over the 20 years,” he said. “We’d had only a small amount of new product. That demand travelled into these new buildings and essentially, for the most part, they’re all full now.”

Corbett said there has been some shifting between the various office classes, but the older buildings are still about 92% full.

“That (B-class) inventory obviously remains static,” he said. “I thought there would be a much more significant blow to that market and there hasn’t been.”

Technology has been the main driver for expansion and new-entrants to the market, Corbett said.

“The new absorption has come from technology,” he said, listing new major downtown tenants such as Sony, Amazon and Telus, which relocated last year from Burnaby to the new Telus Garden building on West Georgia Street.

Telus Garden, the MNP Tower, and 745 Thurlow have felt the most demand since coming to market. “MNP and Telus Garden are virtually full,” he said. “745 Thurlow has one floor left.”

He said observers are keeping a close eye on Credit Suisse’s Exchange tower at 475 Howe Street, which is just rising from the ground now. Currently, the 31-floor, 362,000 sq. ft. tower only has 10 per cent of their space leased by National Bank. “The next 18 months will be interesting for them,” he said.

When Manulife opened its doors to 980 Howe in November they had about two-thirds of the building leased.

On Monday, Steve Smith, Manulife Real Estate’s managing director for Western Canada, said that number had climbed to 85%, with offers pending that would take them to 90%.

“When we built (980 Howe) behind the courthouse we thought we’d have a building full of lawyers,” said Smith, whose firm has 3.5 million square feet of office space in the Vancouver region. “What we realized is that the building appeals to quite a broad cross-section of tenants.”

Smith said the key area of growth for the market as a whole has been tech firms. “If you go back a decade, mining companies were about 30% of the downtown Vancouver office inventory, and they have slipped to about 5%,” he said. “Technology is now about 30%. So they have almost entirely replaced the mining and extraction industry in the city. And a lot of people didn’t see that coming.”