The repositioning of commercial property in Ottawa

The Ottawa commercial real estate market can no longer count on the rising tide created by declining capitalization rates that has prevailed for the past 10 years to boost the value of its properties. 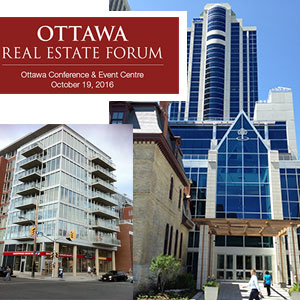 “It is time for specific work on buildings” was the takeaway provided by Sandy McNair, chief curator of the Altus Group, to the Ottawa Real Estate Forum last week.  It’s time to repurpose, reposition, improve performance or simply demolish buildings, he said.

Ottawa has traditionally been viewed as a stable market – “a hedge in a national portfolio,” according to Cushman & Wakefield Ottawa senior vice-president Nathan Smith.

There are signs that Ottawa will retain its reputation, at least in part due to the election of a federal government more inclined to spend than the previous one that cut 15,000 jobs in city.

A recent survey of Ottawa businesses by the Ottawa Chamber of Commerce and accounting firm Welch LLP found that investment confidence was the highest it has been in three years in the second quarter of this year. Non-residential construction is up 32 per cent in the first part of 2016 compared to the end of 2015, due primarily to renovation of the parliamentary precinct, the introduction of a light rail transit (LRT) system and retail development. There have been 40 apartment deals, worth just over $600 million, so far this year.

An autumn chill for Ottawa CRE

Despite these positive indicators, change is in the air in the nation’s capital. Attractive buying opportunities have dried up for larger real estate investment trusts and institutional investors at a time when there’s an abundance of capital.

“Institutional clients still look at Ottawa as a darling and they are constantly looking at all sectors, looking for the stability that Ottawa has always offered in all categories,” said Primecorp Group of Companies chief executive officer and founding partner Aik Aliferis.

Investors that Aliferis is speaking with “are trying to find yields that are a bit stronger” than those offered by buying properties. “Cap rates going down and traditional core deals are just not getting everyone as excited as they used to.

“What we are seeing is movement toward the repositioning of assets. I am finding institutional clients are looking for projects that are creating value.”

Properties at various stages of being repositioned in all sectors in Ottawa were the flavour of the day at the conference, with one very notable exception.

The “Altus Insite Investment Trend Survey” for the second quarter surprisingly showed that single tenant industrial property in Ottawa is the most sought after asset in all of Canada, with 17 buyers for every seller.

On the other end of the scale, Ottawa suburban B-class office space turned out to be the least popular property in the country, with 15 sellers for every buyer.

Regional shopping centres, particularly those owned by large REITs and institutions, are making huge investments in expansions and upgrades across the country, according to McNair. The strategy is “working spectacularly well,” he said.

“In Ottawa, $1 billion alone has been poured into a handful of retail projects to significantly boost performance, reposition and in some cases increase square footage.”

RioCan REIT is planning to upgrade 20 of its malls across the country, four in Ottawa, where it’s primarily repositioning by adding residential units to its properties, said Wright.

RioCan will add 800 residential units to the site of its Elmvale Acres Shopping Centre in south Ottawa, which was built in the 1950s and is located on a bus corridor.

RioCan’s Westgate Shopping Centre, which was also built in the ’50s, has been struggling since it lost its anchor food store in 2003. The REIT’s plan calls for demolishing the buildings and redeveloping the site in three phases over the next 20 years with about 90,000 square feet of commercial space and 1,000 residential units.

The Silver City Gloucester mall is a RioCan property located in the east end at a future LRT station site and in a neighbourhood with existing office buildings. It’s expected to add four new residential towers.

RioCan’s Lincoln Fields Shopping Centre, also located at a transit station, lost its Walmart this year and is now 40 per cent vacant. No details are available from RioCan, but the plan is likely to include mid- to high-rise residential, retail and possibly an office component.

Apartments and other sectors

Ottawa-based InterRent REIT bought an apartment complex at 207 Bell St. N. in 2013. It renamed it LIV Apartments and completely renovated it over two years to target the young professional market.

Heron Gate is a 1,700-unit apartment complex constructed in 1966 and 1982 that was purchased by Timbercreek. A first phase investment of $30 million is completed and phase two is expected to start this year with the demolition of existing buildings and construction of 426 new units.

“A few years ago we wouldn’t have seen Timbercreek going ahead and doing such a large-scale project,”said Aliferis. “But now they are looking at all their assets, looking all their locations across the country, to see where they can throw some money because we have a lot of capital.”

“If we can see a return on that money that is higher without buying assets, then we are seeing that becoming more and more active,” said the Primecorp partner.

Ottawa has seen demand in the student housing sector outstrip existing inventory, as the proportion of foreign students has grown to 10 per cent and has been one of several drivers of the asset class. Two retirement homes, two hotels and a church have been converted to student housing in the past few years.

The Ottawa office sector has traditionally had one of the most stable downtown availability rates, at less than five per cent for about 10 years. Over the past three years it has jumped to a new plateau of 12.8 per cent, with single-digit vacancy nowhere in sight, according to McNair.

Under pressure to attract tenants, owners of buildings at 300 Sparks St., 45 O’Connor St., 66 Slater St., 160 Elgin St., 200 Elgin and 243 Laurier Ave. have plans to repurpose or reposition their properties.

“Institutional buyers are needing to place large deals,” Aliferis said. “There are just not those kinds of deals in the country to meet the appetite that’s there right now.

“It’s going to be interesting to see what is going to happen in the next little while.”